The Church of Our Lady of Angels

Looking out over the Bay of Bengal, with its frontage facing the rising sun, the church of Our Lady of Angels stands in the former Capuchins’ square, surrounded by the streets Dumas, Surcouf and Romain Rolland.
Between the church and the sea lies a little garden, in the middle of which stands a statue of Joan of Arc, armoured and carrying a battle standard. The statue and the garden bearing her name, were acquired and gifted by François Gaudart, politician and industrialist, shortly before his
return to France in 1919.
The statue was installed in April 1923.

Established by the Capuchins, three other churches with the same name preceded the current one. Indeed, the first French cleric to settle down in Pondicherry, as early as 1674, belonged to the Capuchin order.
A first church was built in 1707, a year after the death of François Martin, the first French Governor of Pondicherry.
When it grew small and threatened to collapse, a second church was built between 1739 and 1758, under the rule of Governors Dumas and his successor Dupleix. But like most of the city around it, it was razed to the ground by the English in 1761.
A third church, of which only the square bell-tower and the reallocated nave remain, was then built at the corner of the streets Dumas and Surcouf, from 1765 to 1770.
In 1828, the Capuchins gave way to the Holy Spirit Fathers, who built the current church (from 1851 to 1855) during the episcopate of Msgr. Bonnand, Vicar Apostolic of the
Coromandel coast.

Credit for its construction must be given to the engineer Louis Guerre (1800-1865), descended from a family based in Pondicherry since the eighteenth century; he also built many other beautiful residences in the neighbourhood, including the Vice-consul’s residence and the presbytery.
“The construction of the entire building is of the same nature: made up of brickwork with lime mortar and sand for the foundations, the rising walls and the vaults and arches”.
Priests from the Paris Foreign Missions Society began to replace the Holy Spirit Fathers from 1887 onwards. The church since it was built, has traditionally housed a priest from France, but since 2008, it is being served by a French-speaking Tamil priest, Fr. Michael John Antonysamy. The Capuchins being a Franciscan Order, the church derives its name from the St. Mary of the Angels Basilica in Assisi, which contains the ‘Portioncule’, the little chapel that was restored by Saint Francis and where he founded his first community.
The church of Our Lady of Angels is the only church in Pondicherry where mass is celebrated every sunday, in all the three languages of the city: French, English and Tamil.

Our Lady of Angels stands out by virtue of its immensity, accentuated by its two square bell-towers on the front façade and the polygonal dome above the crossing. This church with a Latin-cross plan stands atop a substructure and occupies a space of 55 by 35 metres. It can be reached through two symmetric staircases, with a dozen stairs each.
The front façade is divided into three bays at the lower level, marked by the three openings. The central bay projects slightly forward and is decorated by a triangular pediment above an entablature supported by twin fluted pilasters of the Ionic order. This serves as the main entrance while the two windows to the side are aligned with the aisles of the nave.
Two inscriptions in Latin can be seen on the façade. One is on the lintel above the entrance: DOMUS DEI (House of God), while the other is on the frieze of the entablature: D.O.M. (Domino Optimo Maximo - To the Lord, the best and greatest) SUB INVOCATIONE DOMINAE ANGELORUM (Under the protection of Our Lady of Angels).

The towers have two levels and are crowned by a rooftop terrace with stone handrails and rectangular balusters. Around the edge of the first level are 24 niches, in which the statues of the 12 apostles and 12 urns are to be found in alternation. Each side of the second level (which houses the bells) features a round arched window that is partly covered by an abat-son.
The side façades are punctuated by vertical rectangular windows, one in each bay of the nave. As in the main façade, the overarching entablature is borne by fluted pilasters of the Ionic order.
Both the façades of the northern and southern arms of the transept, bear a triangular pediment in the spirit of the main façade.
The side entrances through which light enters the transept, may be reached through a stairway with two flights of converging half-pace stairs.

The main entrance leads to a narthex that is shielded by a gallery held up by four coupled Corinthian columns. The five bays of the nave and the arms of the transept are covered by a barrel vault whereas the aisles lie under groined vaults patterned with transverse ribs supported by
pilasters of Tuscan Doric order. The crossing of the transept is crowned by a drum dome propped on pendentives. The nave extends past the transept and ends in a semicircular apse.
The interior architecture includes huge semicircular arches separated by Corinthian pilasters bearing an entablature that goes all the way round the building. Directly above the pilasters, transverse ribs rise from the entablature and reinforce the barrel vault.
The coffers on the vault are deeply moulded and decorated with stylised flowers. The sidewalls are to receive 14 plaster panels of the Stations of the Cross (painted in 2011). These were created in the Parisian studio of the sculptor Jean-Bernard Duseigneur (1808-1866).

The interior of the church is luminous, and presents a contrast between the brightness of the aisles where there is movement and the relative dimness of the nave, suitable for contemplation.
The dome located above the high altar, diffuses a soft glow of light through its eight latticework glass windows based on the primary colours of blue, yellow and red. The slightly elevated high altar is made of white marble with grey veins. It was gifted by François Gaudart. Flanked by two pairs of columns in red marble, a low-relief of the Last Supper is displayed on it in wrought brass. The work however remains anonymous.
A grave marker on the ground, in front of the altar, carries two names, that of Hyacinthe de Lalande de Calan, Governor of the French settlements in India, deceased on the 14th June 1850, and that of his daughter Marie Louise de Calan, deceased on the 25th February 1851. Shortly before his death, the Governor must have planned to build the new Church of Our Lady of Angels on which work was begun in 1851.

From 2009-2012, the church of Our Lady of Angels was under a major renovation programme led by the Association of Friends of Pondicherry Heritage, that gave the edifice back its lustre. The exterior and the interior of the building were completely repainted.
A substantial amount of preliminary work was carried out. The most important of these include: waterproofing work, refitting of the 22 windows, restoration of the 8 dome windows, reparation of the light, sound and electrical system, reworking of the tiling, restoring the 4 columns on the altar, refurbishment of the wooden furniture (unique to Pondicherry) including the caning of the benches and the restitution of the Stations of the Cross.
All this work was executed by firms and artisans from Pondicherry, under the direction of the general contractor Patrick Lafourcade (who died in an accident on the 4th of March 2011), and then under Samuel Victor. The work was financed primarily through individual donations coming from the faithful of the church of Our Lady of Angels, the Association of Friends of Pondicherry Heritage and casual visitors. This was supplemented by grants from the French Ministry of Culture and the VMF Foundation (Fondation des Vieilles Maisons Françaises).
The renovated church was blessed on the 4th March 2012 by the Most Rev. Dr. Antony Anandarayar, Archbishop of Pondicherry. The rehabilitation of the environs of the church and the garden of Joan of Arc, will be carried out in a future renovation programme. 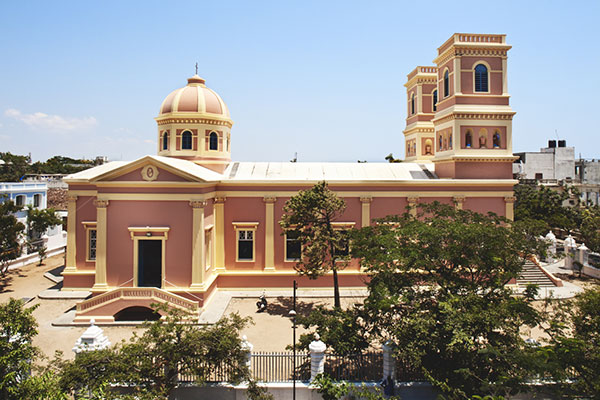 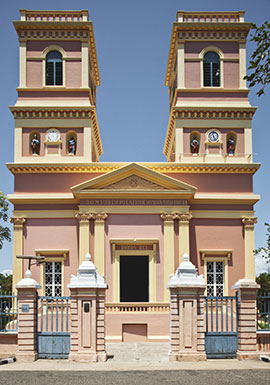